The machine depicted on these web pages is a faithful reconstruction of a little known device called an 'Air Loom'. Devised in the latter years of the 18th century, it was one of the most extraordinary technological innovations to emerge from the Industrial Revolution. 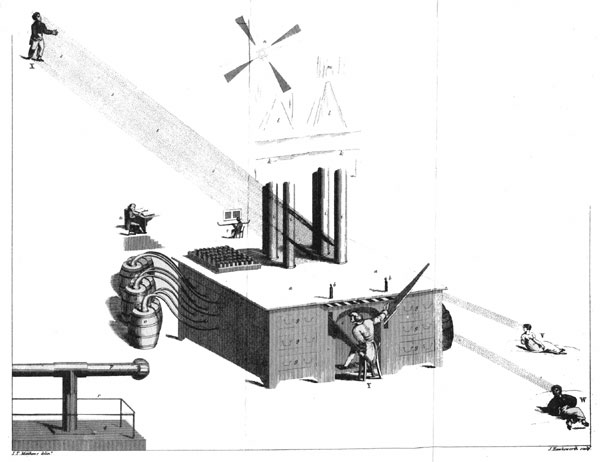 The Air Loom by James Tilly Matthews circa 1810 The Air Loom was a mind control device capable of remotely manipulating and influencing the thoughts of its intended victim. The device and descriptions of its workings emerge into the public consciousness in 1810, detailed in an obscure book authored/edited and published by John Haslam, a respected apothecary.

Haslam's book carefully describes the workings of the machine, and it quickly becomes clear that this was a weapon of war, and that many of these machines had been deployed in London, installed covertly in cellars and staffed by French revolutionaries, undercover Jacobin assassins, bent on using the Air Loom's power to force Britain into a disastrous war with Revolutionary France. Their intended victims were various key members of the British government (led by the then Prime Minister, William Pitt).

London had been infiltrated by groups of assassins who lurked in coffee houses and theatres, where their intended victims were 'primed' by being tricked into inhaling magnetic vapours that would make them susceptible to the Air Loom's powers. 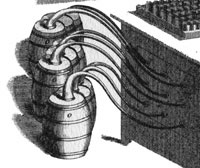 Barrels feeding noxious gases into the machine The Air Loom was a piece of advanced technology, but in the early part of the industrial age advanced technology often meant enormous machinery, rather than the increasing minutarisation that characterises the 21st century. The Air Loom was enormous. The mechanism stood seven metres tall and occupied a footprint of nine square metres, and it was constructed from oak with machined brass fittings.

Haslam's book tells us that the Air Loom was surrounded by barrels that fed noxious gases through oiled leather pipes into the main body of the machine. The gases were derived from substances including 'gas from the horse's anus', 'seminal fluid', 'putrid human breath' and 'effluvia of dogs'.

The Air Loom used recent developments in gas chemistry and the little known effects of magnetism or mesmerism to create magnetically charged air currents that could be directed toward its victims.

One of the Air Loom gang modulating the flow of air with enormous levers. The main body of the machine had a number of keys, levers and brass retorts. These were used to modulate the flow of magnetically charged air that was emitted from the machine. Skilfully combined sequences of the various levers and keys could produce different types of air current, which could be directed towards the victims to assault them with a whole arsenal of psychological and physiological effects.

One of these effects was 'kiteing', where an idea is forced into the thoughts of the victim, 'which floats and undulates in the intellect or hours together; and how much soever the person assailed may wish to direct his mind to other objects, and banish the idea forced upon him, he finds himself unable.'

And similarly, 'Thought-making', another process that involved the victim's thoughts literally being sucked out and replaced with another subject chosen by the gang of revolutionaries who work the Air Loom.

More terrible was 'Lobster Cracking' - the external pressure of the magnetic atmosphere surrounding the person assailed was increased, 'so as to stagnate his circulation, impede his vital motions, and produce instant death'.

Two hundred and fifty years before the CIA's infamous failed 'brain-washing' experiments in 1950 - Mkultra and Operation Artichoke - revolutionary France had apparently invented a machine with a death ray and capable of mind control. 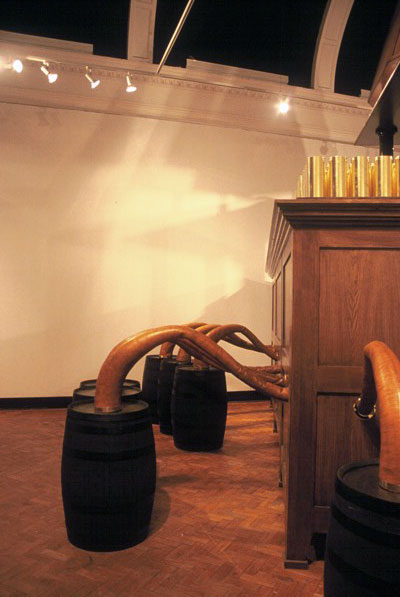 Barrels and hoses attached to The Air Loom reconstruction 2002 It is not a quirk of history that this machine is not widely known. Nor is it the result of a state-sponsored cover-up. Haslam's treatise does contain a surprise, but the Air Loom is not it: Haslam was the apothecary of the Royal Bethlem Hospital, or Bedlam, the notorious 18th-century psychiatric institute. And his book Illustrations of Madness was almost entirely compiled from the unedited writings of one his most extraordinary patients, James Tilly Matthews. The writings and drawings by Matthews, created over a decade of incarceration, describe and depict the Air Loom in extraordinary detail. His delusion was so comprehensive and so absolute it is possible to construct the Air Loom from his measured drawings and plans ...

Matthews' story is as complex as the workings of the Air Loom. There is considerable evidence that he was a kind of secret agent trying to negotiate a peace treaty with France on behalf of the British Government. He spent many years in France during the Terror, the latter years of the Revolution, much of it in prison in fear of his life. The negotiations failed and those in the British Government who had sponsored Matthews' efforts disowned him on his release from France and his return to England. At some point during this turmoil Matthews started to become convinced of the existence of the Air Loom, the nightmarish secret weapon that the French were using against the British Government to wreck his peace negotiations and propel England into what became the Napoleonic wars.

On his return to England he sought a meeting with the then Home Secretary, Lord Liverpool, who refused to see him. Frustrated and convinced that he and the Home Secretary were being manipulated by the Air Loom, he accused him of treason from the public gallery in the House of Commons.

To what extent Matthews was operating on behalf of the British Government is hard to establish definitively, but the Bethlem Royal Hospital Archives and Museum do hold a very unusual letter from Lord Liverpool insisting that Matthews was a dangerous lunatic who should be confined in perpetuity.

Once we understand the Air Loom as a product of Matthews' imagination, a projection of his worst fears, its significance is even more extraordinary: Victor Tausk's seminal text, 'On the Origin of the "Influencing Machine" in Schizophrenia' (1919), is often regarded as the first study of the medical condition of the now-familiar belief of imagined mind control by an invented 'influencing machine', particularly prevalent in paranoid schizophrenia. The Matthews case predates Tausk's essay by nearly 100 years and came 50 years before the advent of modern psychiatry.

Nearly 200 years after Haslam published Matthews' writings and drawings, the Air Loom finally does exist. I built it. Curator Andrew Patrizio and the Laing Gallery in Newcastle commissioned it for an exhibition titled 'All You Need To Know' in 2002.

If Matthews vision was a precursor to secretive CIA and NSA projects, then it also seems fitting that his vision, the Air Loom, was first built in the 21st century. Its natural habitat is a culture riddled with paranoia and driven by the production of fear from the constant, unseen threat of dark and mysterious forces.